“Four mural painting adorning the stairway walls at the courthouse were part of an over all interior redecorating program which the county supervisors authorized in 1920.

The name of Frank Enders, Milwaukee, Wisconsin, is lettered into the corner of one scene, so it is believed that he was the artist.

Old timers recall that the paintings, all

About the General History

Harrison County was at one time a part of Keokuk County.  It was established in 1851 and became an organized county, March 7, 1853, by an act of the Fourth General Assembly, which enactment also appointed Abram Fletcher, Charles Wolcott and A. D. Jones, respectively from Fremont, Mills and Pottawattamie counties, as Commissioners to locate the county seat, the name of which was to be Magnolia, and who were to meet early in March for such purpose. The county derived its name in honor of the Ninth President of the United States - William Henry Harrison.

The Commissioners selected the southeast corner of T80, R43, section 32 and then gave to the 160 acres thus selected the name of “Magnolia” and the Organizing Sheriff called an election on the first Monday of April, the same year - 1853, at which time a full corps of county officers was elected. There were other locations claiming the county seat Daniel Brown wanted it at what he platted and called Calhoun, while another faction wanted it located where Logan now stands, or on the opposite side of the Boyer River.

Properly speaking, Magnolia and Jefferson were the two voting precincts of the county, upon its first being organized, however, some of the persons living in the county prior to March 14, 1853 - time of organization, had exercised the right of franchise by going to Council Bluffs to cast their votes

February 4, 1854, County Judge P. G. Cooper attempted to subdivide the county into civil townships as follows: Magnolia, Sioux, Washington, Wayne, Jefferson; but through some irregularity this division did not stand.

Again in September 1857, the entire county townships were redrawn, making the civil sub-divisions to conform to the Congressional townships.  Some of the civil townships have had their names from time to time. The present twenty civil townships of the county are as follows:

Calhoun, constituted prior to 1857, was named secondary from the village within its border. The village was named from old Fort Calhoun, which was located on the right bank of the Missouri River at a point opposite where the village was platted in 1853.

Cincinnati, constituted in 1856, was so named because of the large number of persons, headed by Jacob S. Fountain, who came from Cincinnati, Ohio. He laid out a town, near a present railroad junction, called Cincinnati.

Jefferson, constituted in 1854, derives its name from President Thomas Jefferson.

Magnolia, constituted in 1853, derives its name from the county seat, which the Fourth General Assembly of Iowa named "Magnolia" - a beautiful, sweet scented flower of the Gulf States.

Union, constituted in 1858, was named by Samuel Wood because of the great friendship and unity of feeling among neighbors.

Washington, constituted in 1872, derives its name from the "Father of his Country", President George Washington.

The first government of Harrison County was under the old County Judge system - the one-man power.  The management

of the county matters being left in the hands of a single officer, it became his duty to locate roads, build bridges, levy taxes, erect courthouses, and was amenable to on one, save on the day of election, when all things were promised to all men!

The County Judge system as then constituted continued until January 1, 1861, when part of the power vested in that system was taken from the Judge and given over to a “Board of County Supervisors,” consisting of one member from each civil township in the county.

This was but little improvement, for where fifteen or twenty men assemble to do public business, the result is that of a pretty lively “debating society,” wherein but a small amount of business is ever transacted. In 1871 the people had tired of such

a management and needless expense and a new law was made by which the several townships were divided into districts - three or five, owing to population, territory, etc…  In this way Harrison County had three instead of fifteen men to attend to her business.

When Harrison County was organized in 1853, by an Act of Legislature, the county seat locating committee decided upon Magnolia as the spot best suited to the wants of the people. But with the development of any new country, especially one settle in advance of railroad construction, there must be many changes made and not infrequently will these changes effect the location of the seat of justice.

At the time Magnolia was selected, Calhoun and the vicinity of the present Logan were both sharp competitors.

The question was ever uppermost in the mind of the people of Calhoun, and this extreme feeling over their own early defeat caused trouble all along down through the years.  In 1870, Missouri Valley, which was then six years old, also saw much advantage in possessing the seat of justice. Over the next several years, several petitions and calls for votes were put forth before the Board to change the county seat location.

In 1875, Logan had grown and entwined herself into the business interests of many living along the Boyer Valley.

The Logan faction now held the balance of power and had the forethought to spring the question at just the right time to ensure success. By a narrow margin of 2 votes, the vote was cast in favor of relocating the county seat to Logan.

On the ground of illegal voting, the Magnolia faction filed papers in a contested election case, but through all the turning over of some prominent men from Magnolia, who had seen it for their financial interest to move to Logan, unbeknown to the masses at Magnolia, the case was dismissed and without a real order of the court and a little out of due time, the records and effects of all the courthouse at Magnolia were all removed to Logan. 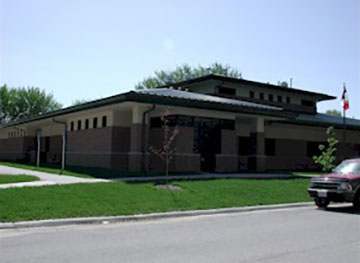 Prior to the removal of the county seat to Logan, Harrison County

In 1877, a two-story jail was erected on logs near the Courthouse.  Its was a brick building and the second story was used

as a residence for the Jailor. On the ground floor were the cells for the safe keeping of ten prisoners.

This jail property cost the county around $7,000 and was good, if not better, than half the counties in the state at that time.

Renovations were completed for a new county law enforcement center in June 2000. 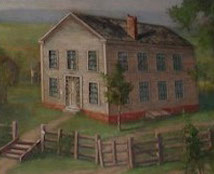 In 1854, the county commenced building a courthouse at Magnolia, from funds derived from the sale of town lots. This was a small frame structure, but met the requirements of the day in which it was fashioned; however as the years rolled on, the elements caused this pioneer landmark of public work to decay and in 1873, it was considered as unsafe by the Board of Supervisors, and they, that year, caused the erection of a frame office building, in which the records and county business matters were kept until Logan was made the seat of justice, in 1876. 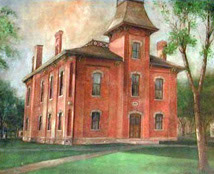 The courthouse at Logan was erected in 1876. It was situated within a level block of land given by the city. The structure was of brick and is 55 x 70 feet and two stories high.

The first floor was divided into six offices - Auditor, Treasurer, Clerk, Recorder, Sheriff and School Superintendent. All but the last named was provided with a good fire-proof vault.

The second floor of the building was used for court room purposes and jury rooms.

The building was erected by contractors Yeisley & Stowell during the Centennial year.

It was built by an appropriation of $5,000 on the part of the tax payers of the county and $9,000 donated by the people of Logan. 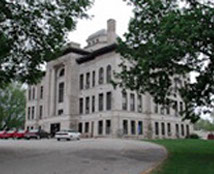 The first Logan courthouse was replaced in 1910 by the current courthouse, a 68 by 96 ft., three-story steel and concrete block building faced with Bedford limestone at a cost

of $103,205.15. It was dedicated November 3, 1911 and included offices for all the County Officers plus a District Courtroom and the County Supervisors meeting room.

The cornerstone notes that the supervisors at the time of its construction were: J. Holeton, Chairman, T. Chatburn, and F. Zahner.